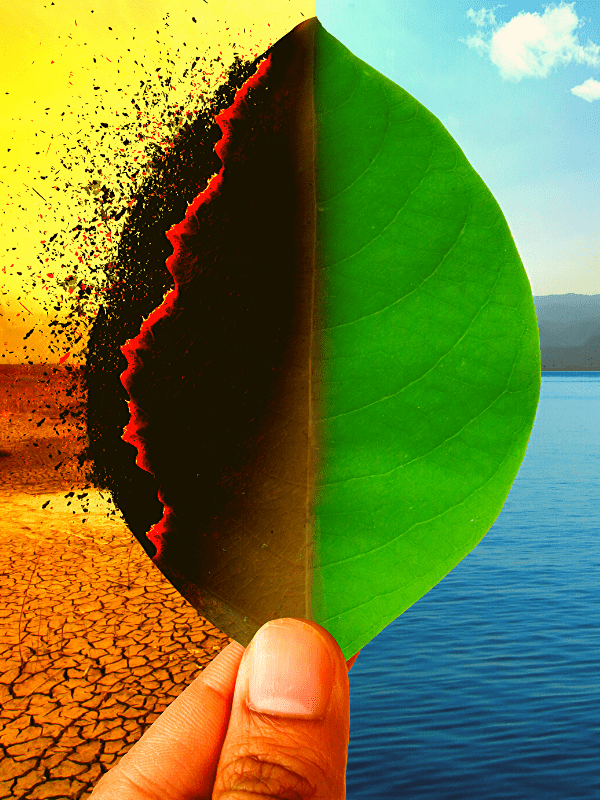 How do we know global warming is real? Who is responsible, and how can it be addressed? This article summarizes what is known (and some of the prevalent misconceptions) regarding this critical environmental problem.

FICTION: Even if the Earth is warming, we can’t be sure how much, if any, of the warming is caused by human activities.

FACT: There is international scientific consensus that most of the warming over the last 50 years is due to human activities, not natural causes. Over millions of years, animals and plants lived, died and were compressed to form huge deposits of oil, gas and coal. In little more than 300 years, however, we have burned a large amount of this storehouse of carbon to supply energy.

Today, the by-products of fossil fuel use – billions of tons of carbon (in the form of carbon dioxide), methane, and other greenhouse gases – form a blanket around the Earth, trapping heat from the sun, unnaturally raising temperatures on the ground, and steadily changing our climate.

The impacts associated with this deceptively small change in temperature are evident in all corners of the globe. There is heavier rainfall in some areas, and droughts in others. Glaciers are melting, Spring is arriving earlier, oceans are warming, and coral reefs are dying.

FICTION: The Intergovernmental Panel on Climate Change predicts an increase in the global average temperature of only 1.4°C to 5.8°C over the coming century.
This small change, less than the current daily temperature range for most major cities, is hardly cause for concern.

A global average temperature change ranging from 1.4°C to 5.8°C would translate into climate-related impacts that are much larger and faster than any that have occurred during the 10 000-year history of civilization.

From scientific analyses of past ages, we know that even small global average temperature changes can lead to large climate shifts. For example, the average global temperature difference between the end of the last ice age (when much of the Northern Hemisphere was buried under thousands of feet of ice) and today’s interglacial climate is only about 5°C .

FACT: The slow heating of the oceans creates a significant time lag between when carbon dioxide and other greenhouse gases are emitted into the atmosphere and when changes in temperature occur.

This is one of the main reasons why we don’t see changes in temperature at the same time as changes in greenhouse gas emissions. You can see the same process occur in miniature when you heat up a pot of water on the stove: there is a time lag between the time you turn on the flame and when the water starts to boil.

In addition, there are many other factors that affect year-to-year variation in the Earth’s temperature. For example, volcanic eruptions, El Ni?o, and small changes in the output of the sun can all affect the global climate on a yearly basis.
Therefore, you would not expect the build-up of greenhouse gases to exactly match trends in global climate. Still, scientific evidence points clearly to anthropogenic (or human-made) greenhouse gases as the main culprit for climate change.

FICTION: Carbon dioxide is removed from the atmosphere fairly quickly, so if global warming turns out to be a problem, we can wait to take action to reduce greenhouse gas emissions until after we start to see the impacts of warming.

FACT: Carbon dioxide, a gas created by the burning of fossil fuels (like gasoline and coal), is the most important human-made greenhouse gas.
Carbon dioxide from fossil fuel use is produced in huge quantities and can persist in our atmosphere for as long as 200 years.

This means that if emissions of carbon dioxide were halted today, it would take centuries for the amount of carbon dioxide now in the atmosphere to come down to what it was in pre-industrial times. Thus we need to act now if we want to avoid the increasingly dangerous consequences of climate change in the future.

Carbon dioxide also cycles through the ocean
Plankton living at the ocean’s surface absorb carbon dioxide through photosynthesis. The plankton and animals that eat the plankton then die and fall to the bottom of the ocean. As they decay, carbon dioxide is released into the water and returns to the surface via ocean currents. As a result of these natural cycles, the amount of carbon dioxide in the air had changed very little for 10,000 years. But that balance has been upset by man.

Since the Industrial Revolution, the burning of fossil fuels such as coal and oil has put about twice as much carbon dioxide into the atmosphere than is naturally removed by the oceans and forests. This has resulted in carbon dioxide levels building up in the atmosphere.

Today, carbon dioxide levels are 30% higher than pre-industrial levels, higher than they have been in the last 420,000 years and are probably at the highest levels in the past 20 million years. Studies of the Earth’s climate history have shown that even small, natural changes in carbon dioxide levels were generally accompanied by significant shifts in the global average temperature.

We have already experienced a 1°F increase in global temperature in the past century, and we can expect significant warming in the next century if we fail to act to decrease greenhouse gas emissions.

FICTION: The Earth has warmed rapidly in the past without dire consequences, so society and ecosystems can adapt readily to any foreseeable warming.

FACT: The Earth experienced rapid warming in some places at the end of the last glacial period, but for the last 10,000 years our global climate has been relatively stable. During this period, as agriculture and civilization developed, the world’s population has grown tremendously. Now, many heavily populated areas, such as urban centers in low-lying coastal zones, are highly vulnerable to climate shifts.

In addition, many ecosystems and species that are already threatened by existing pressures (such as pollution, habitat conversion and degradation) may be further pressured to the point of extinction by a changing climate.

FICTION: The buildup of carbon dioxide will lead to a “greening” of the Earth because plants can utilize the extra carbon dioxide to speed their growth.

FACT: Carbon dioxide has been shown to act as a fertilizer for some plant species under some conditions. In addition, a longer growing season (due to warmer temperatures) could increase productivity in some regions.

However, there is also evidence that plants can acclimatize to higher carbon dioxide levels – that means plants may grow faster for only a short time before returning to previous levels of growth.

Another problem is that many of the studies in which plant growth increased due to carbon dioxide fertilization were done in greenhouses where other nutrients, which plants need to survive, were adequately supplied.

In nature, plant nutrients like nitrogen as well as water are often in short supply. Thus, even if plants have extra carbon dioxide available, their growth might be limited by a lack of water and nutrients. Finally, climate change itself could lead to decreased plant growth in many areas because of increased drought, flooding and heat waves.

Whatever benefit carbon dioxide fertilization may bring, it is unlikely to be anywhere near enough to counteract the adverse impacts of a rapidly changing climate.

FICTION: If Earth has warmed since pre-industrial times, it is because the intensity of the sun has increased.

FACT: The sun’s intensity does vary. In the late 1970’s, sophisticated technology was developed that can directly measure the sun’s intensity. Measurements from these instruments show that in the past 20 years the sun’s variations have been very small.

Indirect measures of changes in sun’s intensity since the beginning of the industrial revolution in 1750 show that variations in the sun’s intensity do not account for all the warming that occurred in the 20th century and that the majority of the warming was caused by an increase in human-made greenhouse gas emissions.

FICTION: It is hard enough to predict the weather a few days in advance. How can we have any confidence in projections of climate a hundred years from now?

FACT: Climate and weather are different. Weather refers to temperatures, precipitation and storms on a given day at a particular place. Climate reflects a long-term average, sometimes over a very large area, such as a continent or even the entire Earth.

Averages over large areas and periods of time are easier to estimate than the specific characteristics of weather.
For example, although it is notoriously difficult to predict if it will rain or the exact temperature of any particular day at a specific location, we can predict with relative certainty that on average, in the Northeastern United States, it will be colder in December than in July.

In addition, climate models are now sophisticated enough to be able to recreate past climates, including climate change over the last hundred years. This adds to our confidence that projections of future climates are accurate.

FICTION: The science of global climate change cannot tell us the amount by which man-made emissions of greenhouse gases should be reduced in order to slow global warming.

FACT: The U.N. Framework Convention on Climate Change states that emissions of greenhouse gases should be reduced to avoid “dangerous interference with the climate system.” Scientists have subsequently attempted to define what constitutes “dangerous interference.”
One study (O’Neill and Oppenheimer, 2002) supplies three criteria that could be used:

1) risk to threatened ecosystems such as coral reefs

2) large-scale disruptions caused by changes in the climate system, such as sea-level rise caused by the break-up of the Antarctic Ice Sheet and

3) large-scale disruptions of the climate system itself, such as the shutdown of the thermohaline circulation of the Atlantic Ocean (the Gulf stream), which would result in a severe drop in temperature to Europe.

This study projects that if C02 concentrations are capped at 450 parts per million (ppm), major disruptions to climate systems may be avoided, although some damage (such as that to coral reefs) may be unavoidable.

Current estimates of atmospheric CO2 concentrations likely to be reached without aggressive action to limit greenhouse gas emissions are far higher – from 550 ppm to as much as 1000 ppm in the next hundred years.

FICTION: Because of the uncertainty of climate models, it is extremely difficult to predict exactly what regional impacts will result from global climate change.

FACT: According to the IPCC, certain climate trends are highly likely to occur if greenhouse gas emissions continue at their current rate or increase: sea level will rise; droughts will increase in some areas, flooding in others; temperatures will rise, leading to heat waves becoming more common and glaciers likely to melt at a more rapid rate.

Regional impacts are very likely to occur, but exactly when and what they will be is harder to predict.

2) many non-climate factors contribute to impacts at regional levels. For example, the risk of mosquito-borne illnesses like Dengue fever and malaria may rise due to increased temperatures, but the actual likelihood of infection will depend greatly on the effectiveness of public health measures in place.