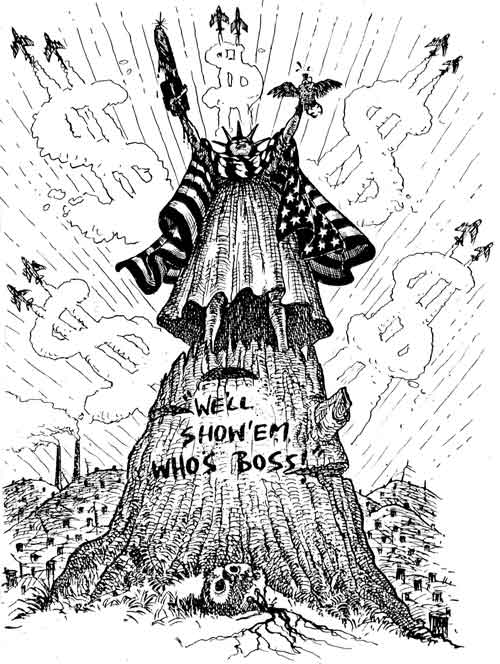 To save the world, change the way things are done!

Well! George Bush the lesser and his neo-conservative cronies have been given another 4 years to plunder, rape and over-exploit the environment as they see fit. One of the most corrupt and self-interested governments ever seen is in charge of the most powerful nation in history.

If ever there were a time for activism, it is now.
Energy policy is dictated by energy industry insiders, food policy and food aid is steered by owners of multinational genetically modified corporates, legal affairs are in charge of someone who reckons torture is okay, bugaboos abound. Reds under the bed have been replaced by caricatures of shady Islamic leaders, a new enemy to keep the arms industry afloat.

The US is significantly deeper in debt than it, or any other nation, has ever has been. Central bankers worldwide are moving ever-larger amounts of investment funding toward the Eurozone, further darkening the US economic outlook. The Bushites are presently slavering over their projected plunder of social security that will erode the welfare of ordinary citizens and pulverise the skeleton of Roosevelt’s “new deal.” An economic meltdown of gargantuan proportions beckons.

War is being pushed as the best business option to pull the US out of its financial hole, especially given that Daddy Bush and his friends the Bin Ladens have invested into the shady Carlisle group, which profits from arms, war and destruction. War material is the ultimate waste; as soon as a weapon is made and sold it will never earn another cent; that money is taken out of the productive global economy. Gone.

This state/ corporate nexus has plumbed previously unimaginable depths of insider trading, as epitomised by Dick Cheneys Halliburton Corporation. The new US Attorney General deemed, in a memo to President Bush, that torture is acceptable and that he does not have to abide niceties like the Geneva Convention.

Corporate lobbyists for mining, logging and ranching public reserves have been given full rein to dismember national and international environmental legislation and protection. Corporate donors are given carte blanche to pollute as they see fit. This is a sick world if we accept these barbarians as the leaders of the free world.

The depths of state/ corporate glad-handing is being ignored by a compliant, corporate run media that distracts the masses from this circus of excess ripping our world apart brick by brick, tree by tree. This is like putting a cadre of criminals in charge of the penal system and then expecting the rest of us to step aside and let them run our world and sanction their evil deeds by silence.
We must not and cannot accept the role of passive observers. This is our world and our future.

Bush is a child of privilege who has never put in a real day’s work in his life. He is cosseted by cronies who misinform him as to the realities of life. He is too dumb to really know what is going on in this world. History will certainly judge him harshly.
After 9/11 Bush said that ‘you are either for us or against us’. Afforded the abysmal choices that America presently offers, it is morally questionable to accept a leadership so uncaring of our world and its people.

It is not anti-American to oppose that ruthless leadership that has twice somehow gained power under dubious circumstances. The world should stand united with the ordinary people of America, misinformed and deceived as most of them are. And remember, Bush was only voted in by just over 50 million of the 250 million people that live in that nation. Hardly a majority.

The land of the free now has a chain of gulags around the world; Guantanamo Bay, Diego Garcia, not to mention the torture cells of US allies used to silence the powerless, to crush opposition and to smash dissent in the name of democracy and freedom.
If we examine the state of justice in the USA it’s clear to see that the torture in Iraq was not an aberration; that’s how the US justice system works.

The US is undeniably a great nation. Its constitution has long been a beacon to global freedom. But the incumbent White House gangsters are gutting personal rights; detention without trial or secret evidence is now accepted. Open protest is prescribed. Personal privacy is history. Freedom of the press is an illusion. Instead, a compliant mainstream media echoes his masters voice. A tiny, extremist cabal has in four years steered the USA firmly towards fascism.

Fascism is defined variously; Benito Mussolini, its originator said it is the merger of state and corporate power, united under an authoritarian, nationalist regime. That sounds pretty much like the Bush regime to me.

Hitler’s’ chief advisor, Herman Goering said that people are compliant in all forms of government, be it a democracy, a fascist dictatorship or a communist dictatorship. All that is needed is to tell the people they are being attacked; denounce the peacemakers for lack of patriotism and for exposing the country to danger said Goering. Cheney, Wolfowitz, Perle, Rove, Rumsfeld and Rice have learned their craft from masters.

The Bible tells us that the antichrist will disguise itself, taking the word of the Lord as its own. Look at Bush’s core support – neo-conservative, rabid Christian fundamentalists with a death wish to for “the rapture,” – otherwise known as Armageddon.
These people feel no compunction about poisoning, polluting and killing our world. Many of us have American friends but we must differentiate between the brainwashed, average American and the sly, underhand, consciousless, greedy and immoral leadership that a few lost souls have been fooled into re-electing. The American people are good people but their leaders display little humanity except for expediency’s sake.

So what can be done by those of us outside the 1776 Disneyland?

Resistance is possible, advisable and fertile. Here are some ideas: Avoid dollars – it’s a bad financial bet at the moment and it’s a dollar less to finance war. Rather use Euros.
Boycott US products, buying local wherever possible. Coca-Cola owns most soft drinks in South Africa, including Appletiser and Liqui-Fruit but there are alternatives such as Ceres and Jive that are just as good.

Buy local clothes and jeans; even if Levis are one of the more responsible corporations, let them pile some pressure on their government. They have far more power than you or I, and if we withdraw our custom and let them know why, then we can force them to pressure their government to change tack.

So, nuke Nike, rid us of Rheebok and mute McDonalds. The rest of the world could not vote for them but we can vote with our money.Of course we are all obviously screening out Monsantos GE food products (nearly 100 percent of GE food in SA is patented and owned by Monsanto) but why not boycott Frito-lays, KFC, McDonalds and all of those? What’s wrong with our home grown Spurs, Wimpy and St. Elmos after all?

For those who claim we will shed jobs if we follow the boycott route – nonsense.

We will build our own economy, retain corporate profit in local companies, all while supporting local and proudly South African.
In the last issue I wrote about how one of the great opportunities for change rested in the possibility for a global financial meltdown. The meltdown looms larger than ever. The US economy is afloat upon an ocean of hubris and little else. The housing market is hitting the skids. Investment in the US economy is plummeting. Meltdown beckons.

Yes, certainly, a meltdown will affect all of us but this will not be a bad thing. We desperately need a perspective shunt. We know we simply cannot continue, things must change. Change is always uncomfortable but what could possibly be worse than the destruction of our planetary home?

If we want to save some planet for our children we must all act decisively. No more fence sitting.

If we wish to rid ourselves of the corporate gangsters in the White House, we have to clearly show them that we are not for them. They only understand one thing. Money. Use it, its yours.

And no, this does not mean we are for terrorism. We are for civilisation, for good neighbourliness, for participative democracy and for tolerance. The US may get one out of four of these, but its just not good enough.

But ask just who is terrorising whom around here? Ask the families of the estimated 100, 000 dead Iraqis that the US have not even bothered to count, the trauma of the children of that entire region as they fearfully contemplate US belligerence.
In modern war 93% of victims are civilians, 48% are children and 7% are soldiers. No politicians die. They give Iraqis no sewage, no water, no power, no petrol in the nation that has the worlds second biggest oil reserves. And Bush thought that the liberators would be welcomed with flowers!

If the USA was invaded, would those who resisted the invasion not be called patriots?

How did the patriots of Iraq all become terrorists? Never forget, Saddam was Americas man against the other “Islamic Threat”, Iran. Never forget who gave Saddam all he needed to do what he did. What would you do if your nation were illegally invaded under false, illegal pretenses?

Do these arrogant goons not ignore us all by studiously disregarding global warming and environmental resource depletion, forest destruction and a poisoned planet, just as they ignored the fact that they would piss off the Iraqis? Do they not terrorise us all in subtle and underhand ways? If you are not for us, you are against us.

These people think that they set the agenda that we have to follow, that they create the reality. Well, that’s all changing, ‘cos they are dealing with a bad hand and no money to bet.

Its time to call the bluff with Uncle Sam.

It is essential that we consider what is happening and how messages are being twisted to subtly alter our perceptions of reality. Examine our world and understand it; we can only manifest change by doing so. Reflect their darkness right back at them, and use your money to get rid of these greedy hypocrites for once and for all.

When the USA has to come to the rest of the world to beg us to support their economic plight, then they will be accepted as equals amongst equals and we can build a better world.

The global benefits of not eating meat