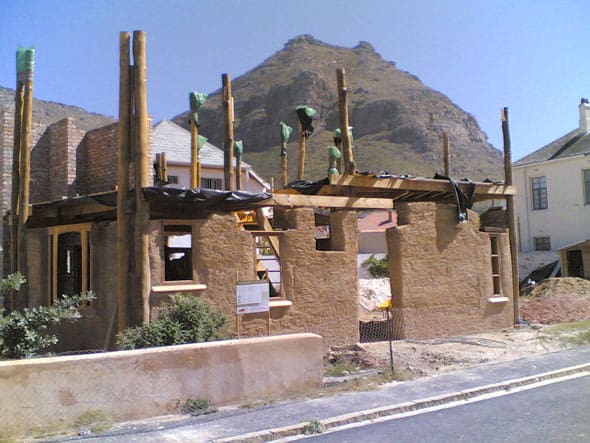 Cob in the City

Muizenberg’s first cob house has almost been completed. Cob is one of the natural building techniques — like adobe bricks, rammed earth, sandbag structures and straw bale — presently used in South Africa. All of them use natural materials (sand, clay, straw) to create solid structures that breathe

with the surrounding environment, being naturally cooler in summer in warmer in winter than fired bricks and cement. Of these, we’ve chosen cob to build in, as it also allows you to sculpt elegant curves: there are no straight bricks involved in a cob wall!

However, we’ve also chosen an unusual location to build in.

Most alternative buildings are safely tucked away in isolated rural spots; the few in Cape Town are in secluded areas like Noordhoek or Constantia. The people who find a cob house are thus typically already looking for it! By contrast, we’re building on a suburban street in Muizenberg, 200m from one of the city’s busiest beaches. All kinds of people are now being surprised at a cob construction for the first time, leading to bemused comments to neighbours or even radio stations!

Our prominent location does come with certain pitfalls.

Technically, you can build a sizeable cob house for next to nothing, using soil from your site, salvaged windows and doors, and being clever with your roof. This is simply not possible when the city council’s regulations need to be dealt with, and joinery all needs clear advance planning – though at least we’re avoiding using merinty, a commonly used hardwood that is clear-cut from tropical rainforests, and we’re also steering clear of chemicals in the treatment and protection of our wood. Besides this, we have naturally had to get our clay by begging from other excavations, since all our site offers is beach sand.

And the foundations – especially around the load-bearing gum poles that will hold the roof – faced the snag that we hit the water table at less than 2m. We had to use some concrete reinforcement at short notice – don’t tell anybody!

All in all, the costs have mounted, but it will still be considerably cheaper than building a conventional house on the site.

One of the costs we’re happiest to pay is labour. Cobbing is a slow, labour-intensive process, and doing it all ourselves is just not practical with two small children. But we’re happy to pay out on giving people jobs, rather than on the energy used in making bricks and cement. Cobbing should be one method used for building new housing in this country: communities can empower themselves doing it, and honour the great South African traditions of mud-building, like the Transkei rondavels – or the old adobe farmsteads in the Cape. Beautiful, healthy houses can be built with pride, rather than tiny breezeblock monstrosities or ‘expert’ housing built with no connection to the community.

But there is a problem: the South African general public see a ‘proper house’ as being made of fired bricks and mortar. No matter that cob houses in the rainy west of England have been there for 400 years! So we’re hoping that our building process over 2007 will help to shift perceptions.

We’ve already held several public workshops (on the last Sunday of each month) and have schools lined up for outings this year. Children, of course, get very empowered too by using their hands and feet to mix the cob, and they get the satisfaction of doing something really useful, and getting really muddy with it!

In fact, when the house is complete we’re sure the public education will not stop. The plot is big enough for us to continue holding building workshops on the site for years to come!

And we aim to offer a really “organic” B&B experience for guests, once we’ve moved in. We plan to fit the house with as many ‘green’ aspects as we can – such as solar power generation and grey water, though the house also has an excellent design for passive solar heating and cooling.

One of the more sticky facts about alternative building is the lack of finance available. Housing ministers and officials have made positive noises about adobe-style buildings over the years, but there are still no national building standards relating to these kinds of buildings.

And because of that, no housing grants or subsidies are available for previously disadvantaged communities wanting to build this way. Moreover, no banks will give bonds for these buildings, because without standards to adhere to, the National Home Builders Registration Council (NHBRC) cannot inspect them and certify them – and the banks demand an NHBRC certificate.

Our engineer is making use of strict earth-building regulations from New Zealand to test our building for structural and material soundness: we hope to be a test case for altering regulations, so that future builders can get the finance they need.

For us, we have been lucky enough to raise most of our money as soft loans, but the B&B is an integral part of our finance plan.

So if you’d like to book somebody a mountain view, seaside holiday in an organic house with organic breakfast available, and support our project at the same time, get in touch!

The Right to Food